Powergirl is a character very popular with both the fetish and cosplay crowd.  To understand this, one needs to know the character and how she is the counterpart to the more well known Supergirl.  In the DC universe, there were characters from the golden age still fighting the good fight of WWII.  Yet how could these characters be of interest to young readers who had never even heard of or experienced the war against the Nazi empire and Hitler?  Enter the concept of parallel universes.  DC's current and relevant superheroes such as Batman, Superman, and Wonderwoman would be 'Earth 1'...and the characters from the golden age and their counterparts would be in 'Earth 2' where the characters could age, marry, or do things not associated with their current counterparts.  The universes could meet for adventures and crossovers, which is also a plus for both comic book publishers and readers, and still make the golden era comic book characters live on in new readers.

Powergirl is Earth 2 version of Supergirl.  So essentially she is a super powered Kryptonian, but with a different attitude and a more revealing outfit.  From a fetish standpoint, she is a super powered hero with undertones of a dominatrix in her actions and attitudes to her counterparts as well as her foes.  Whereas Supergirl is the good girl of comics, Powergirl is more brash and confrontational with everyone.  Discounting the unconscious fetish aspect, her character is a take no prisoners and make no apologies female comic book hero.  Her popularity in cosplay circles reflects this..most Earth 2 characters do not resonate like her popularity, and she is a popular character at comic and trade shows.

I am pleased to share an interview with Gina G, who does cosplay as Powergirl along with other comic book heroes.  She isn't a spandex fetishist, but a seamstress who enjoys working with spandex. 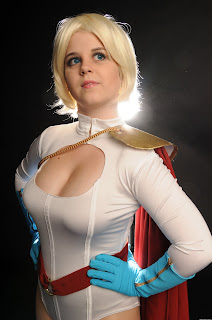 Tell the world briefly about yourself.

I'm Gina G., and I'm a seamstress from Canada. I've been making costumes since 2002, and have been working with spandex since 2005, a fabric which I seem to have a particular skill with and fondness for. I love cosplaying more than anything, and my favourite superhero is most definitely Power Girl! I also speak Norwegian!

What brought into the world of cosplay?
I stumbled into the cosplay scene by accident. When I was younger, I really wanted to start making my own Halloween costumes, since the stores never had what I wanted, so I learned how to make garments from my great aunt. When I was 15, a friend told me about a local anime convention, and I thought the idea of dressing up for an entire weekend was awesome, so I went. I haven't looked back since! In the last year I have really pushed my limits and made some wonderful contacts and friends in the cosplay community. 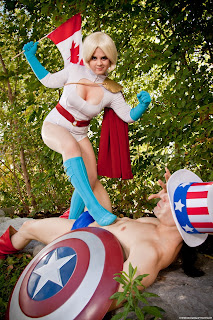 Any particular characters(Marvel, DC, anime, or others) you enjoy cosplay more than others? What about that character keeps bringing you back. Power Girl is definitely my favourite DC character to cosplay. Everything about her is me. She's a strong, confident woman, doesn't take anyone's crap, and is successful and goal oriented... and let's not start on the obvious physical "details".
As far as Marvel goes, I love my Snowbird costume. I'm fairly new to Alpha Flight, but I think the idea of a bunch of Canadian superheroes is great! When wearing the costume, I just feel really badass, and my white-out contact lenses get a lot of looks.
Both of these costumes were drafted almost entirely by me, so I'm really proud of them. Not to mention, they are probably two of my best works involving spandex. 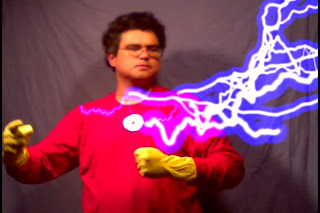 While on the subject of parallel universes and characters, for Ectovision, I created Saturn Hero as a counterpoint to my movie character Major Power (shameless plug : Major Power and the Flying Saucer from Mars, Major Power and the Robot from Saturn both are available for DVD and VOD off of amazon and indieflix).  I guess if I were to compare the two...Saturn Hero is more pre Alan Moore Marvelman to Major Power as Captain Marvel.  I shot these clips with some flip type of cameras...mostly for fun than anything else, with my newborn daughter's toys as heroes and bad guys...I had a lot of fun having Saturn Hero fighting evil King Eric (named after my friend Eric Butts (director of girl/girl scene and executive producer of my film Zeppo), and actually put together a hand drawn comic book for it.  The 'King Eric' puppets came back for a crazy nightmare sequence in 'Saucer Sex Peep Show'.  I'm also working on new Saturn Hero clip with Matt Enstrom and Henry Humble, but that's down the road.
I put together the Flip camera clips together as one long clip on youtube...Is it highbrow art or will the movie change your life? No, but if you want something fun and silly to make you laugh...check out Saturn Hero (microbudget puppet theater).