The late Ingo Swann, one of the first members of the then classified 'stargate' project, decided to use his method of coordinate based remote viewing on something other than mundane objects.  Ingo as a lark decided to do a telepathic target of the planet Jupiter, and noted of the ring of Jupiter and other anomalies that were later confirmed by NASA pioneer probe.  This feat attracted some in the intelligence field, and his strange journey was documented in his book, Penetration.

After this feat, he was contacted by the mysterious 'Axelrod' who asked him to do remote readings.  Supposedly Swann did a read of the moon, and to his shock and horror found a huge number of aliens and their structures on the far side of the moon.  Swann also noted that the creatures were also psionic.  Later interactions with Axelrod from an attractive brunette female in a Los Angles grocery story under watch made Swann realize that the visitors are already here in many forms, and that their natural foes are the people who have the ability to harness human telepathy.

Swann goes into a fairly detailed reason why the truth is hidden about the moon, and of course the 'aliens' in our midst.  In a weird way, Swann describes a scenario not unlike the nightmarish film, They Live, by filmmaker John Carpenter.  In that film, aliens are hidden among us, all the while suppressing us to the real horror.  While noted as a social commentary of the consumer driven 80's, some like Swann say there is more closer to reality than believed.

When his book came out, Swann was subject to ridicule until much later it was revealed by declassified information he really was on the CIA payroll as a part of the stargate project.  Just how much of Penetration is true is up to the reader to decide, and Swann said he has no proof of Axelrod due to the G men exercises of eliminating all evidence.  I guess if there is any truth to the book, people should start harvesting their ability to see beyond and watch out for any striking curvy brunettes in the vegetable isle.

Posted by Purple mage 7 at 5:25 PM No comments: Links to this post


One of the most enduring legends is of a wild hairy creatures that roams the mountain sides and forests world wide.  Some call it the Yeti, the Grey man, or most commonly Bigfoot.  Outside of footprints, and some marginal evidence, the only evidence is first hand sightings.  No remains of Bigfoot, or of any droppings, has yet to pass rigorous scientific testing.  So the basic conflict is there, how can you account for the many sightings of the creature spanning hundreds of years, across the globe, and yet outside of the alleged Patterson film no concrete evidence?


Enter F. W. Holiday's basic idea of the 'phantom menagerie' from his book, the Goblin universe.  Holiday believes after studies the loch ness monster, and other alleged creatures that they may be more of a paranormal creation.  He believes like Jung, that UFO's are not machines from other worlds, but rather paranormal entities.  That the loch ness monster, big foot, and men in black could be paranormal things more akin to medieval demons, and could originate in other dimensions..'winking' into our world at will.  Of course, this is only a theory and unless there is some strong collaborating evidence to support Holiday, it still remains outside mainstream scientific thought.

Still, perhaps the Bigfoot has more in common with the boogeyman or ghosts then previously thought.  Only with more research can the answer be found.

Posted by Purple mage 7 at 12:29 PM No comments: Links to this post 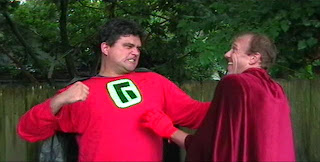 Major Power, which was a homage and parody of the old captain marvel / superman serials from 40s along with the george reeves TV show. Shot/edited on analog from 2008. written and directed by Jerry Williams. black and white

It was part of the major power and the flying saucer from mars, which is available on indie flix, here is the link.

http://indieflix.com/film/major-power-and-the-flying-saucer-from-mars-19404/
Posted by Purple mage 7 at 5:21 PM No comments: Links to this post

In this episode of 15 second theater, Saturn Hero rejects his jilted ex girlfriend.


The Loch Ness monster, or 'Nessie' has become a staple of popular culture, and has been the subject of several hi tech searches of the murky waters to capture or spot the monster.  Some say Nessie is a hidden dinosaur, and others say it is a hoax with many delusional people seeing the sea monster.  The fact remains, outside of folklore, sighting and shaky photo evidence, nothing concrete is there about Nessie.  Could there be a more bizarre and other worldly explanation to the existence of the Loch Ness Monster?

Enter paranormal investor, F.W. Holiday, and his book 'The dragon and the disc' which concludes that the stories of the Loch Ness monster point out to a real creature, yet it was also connected the UFO mythos of sea serpents from other worlds...other dimensions.

He supports the idea that nessie may be a paranormal creature that is associated with magic, and points out that notorious magician Aliester Crowley had a house on the shore of Loch Ness, and he was rumored to summon a dragon worm to the Loch which ended in failure for Crowley, and this failure began to mark the decline of the warlock.

Is Nessie lurking in the waters, or is it something connected to the UFO mythos of men in black, aliens, telepathy, and worms from beyond?  Only with more research can the answer be found.