If I was going to name the film that influenced all of my films, I'd probably give this film as one of the most influential on what I did with films.  Richard Elfman started his street theater group 'The Mystic Knights of the Oingo Boingo' in the early 70's after doing a stint in Jean Savary avant garde theatre troupe in France.  Essentially the mystic knights would do crazy max fleischer type of cartoon raunchy burlesque live action theater with old Cab Calloway standards and originals performed by Richard's younger brother Danny Elfman.  They played theater venues and eventally doing a stint on the gong show.  Danny Elfman was pulling the mystic knights to drop the theatrical elements and go more for a punk vibe ala XTC.   Eventually the Mystic Knights became the pop punk band Oingo Boingo which led to a successful scoring career for Danny Elfman (Batman, Spiderman, Planet of the Apes, Nightmare before the Christmas).


The plot is the Hercules family moves into a new house and the basement leads to the sixth dimension where King Fausto (Hervé Villechaize) and Queen Doris (Susan Tyrell) hold perverted court. Squeezit and his drag brother Rene are followed by Frenchy who catches the heart of King Fausto.  Many crazy antics follow as the evil Queen Doris is given her just desserts.  There also the devil played by Danny Elfman and the rest of the mystic knights holding court.  If you cross a Betty Boop film with Jerry Springer you get the idea of the madness of the film.

There are two versions of the film, black and white and a recent colorized version.  The behind the scenes story of the film is pretty interesting, and I know that the sequel Forbidden Zone 2: Sex Galaxy is in production with a small segment featured on the spfx show Face Off.

Worth  a look for fans of Spandex and Monster.  Expect very non PC humor though!  It's a toss up which film of mine is the most influenced by Forbidden Zone, although I'd say it's probably Zeppo: Sinners from beyond the moon (complete with a cool music number by wunderkind producer Eric Butts).
Posted by Purple mage 7 at 6:38 PM No comments: Links to this post


With the successful reboot of superman with Man of Steel, more and more folks are quietly hoping for a possible justice league film or even a reboot of Wonder woman.  Outside of the iconic 70's tv show, Wonder woman has had problems being adapted to screen.  To underscore this, just look at the adult parody of wonder woman with adult film star Kimberly Kane and compare it to Adrianne Palicki's wonder woman in the unsold pilot by David Kelly.  Kimberly Kane looks very much like Wonder Woman if it was a big budget screen adaption, whereas Adrianne Palicki looks like she got costumed at the local halloween express.  It points to the problem of rebooting the amazon princess to the big screen.  Few movie studios are willing to invest in a big budget Wonder Woman reboot.


Quietly adult entertainment has exploded with its fairly faithful adaptions of comic book franchises. You could argue the sex subtext was there in the comics from the beginning, and changed to reflect society's ever changing mores.

Perhaps with more adaptions sticking closer to the source material, and the general success of such adaptions, there may be a new influx of comic book heroes green lit by the studios in the near future, and possibly with more obscure characters out there.

Posted by Purple mage 7 at 9:21 AM No comments: Links to this post

While not officially directed by cult filmmaker Ed Wood, this strange film has enough 'woodisms' to be part of his unique cinema canon.  Veteran nudie filmmaker A.C. Stephens asked Ed Wood to provide the screenplay (which originally was 20 pages with the rest of the time to be filled with horror themed nudie dancers).


Up and coming cult actress Pat Barringer did a dual role as Shirley and as the haunted gold girl dancer.  Rounding out the cast was Ed Wood actor/friend/psychic Criswell as the lord of undead.  Actress Fawn Silver in her only role played a character very much inspired by Vampira.


For erotica, it's pretty bad and boring.  The nudity and music pack as much heat as an ice pack.  At this point in time, nudies were still big and even a disjointed surreal film like Orgy of the Dead could still do business.  Still like plan 9 from outerspace, its got its own unique charm all its own.  The weird day for night/night for day switches are par the course for an Ed Wood film.  Criswell seems either drunk or half asleep as the emperor of the dead.  There are random mummy and werewolf creatures that capture Bob and Shirley (which was Ed Wood's preferred drag name....projection?).  Their torment is to watch burlesque dancers in cardboard graveyard before the sun comes up.  Somehow Bob stalls them, and with the morning sun...the couple wake up in the graveyard.  Was it a dream?

It's one of my favorite films from Ed Wood, but like most collectors the only parts of interest are of the horror writer and Shirley struggling against Criswell.  The dialog is nearly post modern gibberish of epic horror proportions.  Is this film for everyone?  No, but for fans of Ed Wood, definitely a gem in the rough.

Posted by Purple mage 7 at 5:04 PM No comments: Links to this post

The strange saga of marvel man

The strange saga of Marvel man


Created out a need for a hero when the British reprint publisher ran into problems when the popular Captain Marvel character was being forced out of business by DC's lawsuits claiming Captain Marvel was a rip off of the popular Superman.  Marvel man was a cosmetic revamp of Captain Marvel, with his nemesis being Gargunza as opposed to Dr. Sivana.  Artist Mick Anglo created Marvel Man for publisher L. Miller and son in 1954.

Marvel man ran its course before folding up in the early sixties.  Later, the character was revamped by occultist/writer Alan Moore (which due to copyright issues was dubbed Miracle man).  Moore explored the dark side of heroes, and the blurry line of gods among us.  While more well known for the Watchmen and the Killing Joke, some contend that Alan Moore hit all the right notes of superhero subversion with Miracle Man.  Future Sandman writer Neil Gaiman also did a run on the series before it folded under from poor sales and business buyouts. 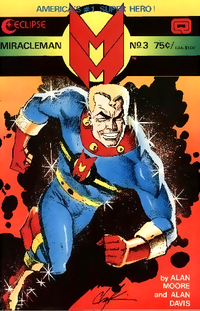 Fast forward to 2010, and in a surprising move Marvel comics acquired the rights to the original Marvel Man, and published a small run.  As is the case of the character, allegations of copyright abuse fly like bricks with Spawn creator Todd McFarlane alleges that he owns the character from the Alan Moore days.

In the crazy world of superheroes and copyrights, one will again see in the future Marvel Man arrive in flight.


Saturn Hero
An offshoot of my hero Major Power, my character of Saturn Hero is an homage/parody and tribute to the original Marvel Man.  I also make Saturn Hero the focal point of my 15 sec theater.

Posted by Purple mage 7 at 9:21 AM No comments: Links to this post