In this episode of Spandex and Monster, we explore the weird surreal films of Chris DeJoseph and his group Friday nite frights.  I first discovered these films on you tube, and I was instantly hooked by them.  Sexy ladies, monsters, and people wearing rubber masks in carny films that range from horror, comedy, and all places in between with subtle subtext of fetish, science fiction and horror.

So without further ado, here is filmmaker Chris DeJoseph of Friday Nite Frights.

Tell the world who you are, and what is it you do with your films.

Born and raised on Long Island,New York I came from a struggling middle class family.I was a cartoonist as a kid along with my 2 brothers,and always enoyed putting on puppet shows,Haunted Mazes in our basement,plays for the neighborhoods and horror games outside.I was a creative writer since I was in 3rd grade.I used to draw dozens of comic books with my own cartoons and give them out to the girls in class.I contined drawing as I grew but nearing around 20 I was getting bored being alone often(Drawing) and wanted to do something that involved my friends.It wasnt until my older brother wanted me to go in for a christmas gift for our Dad in 1987(an RCA Video Recorder) that I completely got sucked into the video era.I made a home video with my friends that year and it was awful.It was my first project so I was entitled to many mistakes.Neverless,it struck a cord with me and I continued on and started making comedy sketches.Soon after,the comedy shorts came in.I did do a half a dozen horror themed projects (pre-Frights)that were later drafted into the FNF series.I loved acting and enjoyed making people laugh,mainly because I loved to laugh.I knew that I was never going to afford to pay to go to Film schools,College for Cartooning, so I decided to just go ahead and make my own blend of films anyway and share them with the world,maybe someone out there will like them.I would love to be a film producer but it probably wont happen. 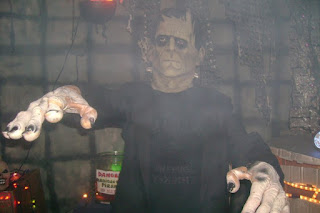 Your films have a dream like and surreal quality with monsters, sexy ladies, and rubber masked people in the films. What influenced you to bring in all of the masks for the films.

The rubber masks,The "human faced rubber masks" were originally used because I did not have enough actors for that shoot.So ,I had a strong actor play multiple parts in a video many times.It has been the same factor since I stared filming.I don't have anyone under contract so they may be here with me today,but could be gone tomorrow.


After I discovered for myself your unique films that focused on a horror and a carny fun house aesthetic, I was surprised that you also have comedy clips as well. Was that intentional, or did it grow out of making the horror themed movies?

I already mentioned that I started doing comedies first(they are still my favorite to do)and did not get the Friday Nite Frights series established until1997.Benny Hill,3 Stooges,Laurel and Hardy,all my idols and influences in comedy.

What is the film you are the most proud of? What film you think represents what you do in a single film?


My most proud project is very hard to say.I will probably have to say 'Count Gore's Bloody Terror" is my favorite,not only did it cost me a ton of money but it is what got me going.I wanted to do a wild werewolf vs. vampire tale(influenced by late Paul Nashy)and it took me 7 years to fully complete that project.It was my thorn in my side for over half a decade,but when I finished it another idea hit and BAM! the 3 Wolf Beast adventures were made!Another series that I am proud of that help define my series.


What are your future plans?

My future plans,I am currently filming my last season of the NEW Friday Nite Frights.I am gonna try to do some Clips for Sale with some of my Models so that I can provide some funding for my next series that I would like to venture into-a Live Action Cartoon series.It will take some capitol but I am gonna try to bring my own characters to life!I will continue to release the rest of the Frights from my Vault for the next 3 seasons I have slated.After they are all uploaded,i will come back with a big Halloween Special to compliment the series.

If someone wanted to find out more about you and your films, where would they go?

You can check out my vids on youtube at http://www.youtube.com/user/fridaynitefrights and I am on Face Book as well.

In keeping up with the surreal theme, we visit this fake film within a film.  It was for my film Ectovision, and was a spoof of several business guys trying to con indie filmmakers with their money for suspect reasons.  In the ectovision segment, two idealistic filmmakers(Claude Miles and Rebecca Spiers) approach sleazy movie producer John Bevin (Billy W. Blackwell) for money to produce a silent black and white art film with better equipment.  He looks at their demo and then proclaims it to be 'crap' and then produces for the idealistic filmmakers this film instead of their serious work with his money to show his way versus the idea of art for arts sake.


Crazy surreal humor and 'Hackworths to nowhere!' It was also a spoof and satire of how the bottom line can screw up art, and how we inadvertently sell ourselves out for a quick buck.  It was fun to make a deliberately chaotic film.  Starring Steve Guynn as the mad poet and Heather Price as the sexy witch and saucy undead Luna!

Here is the clip for everyone to enjoy...she is dead...dead I tell you!