Kit Quinn on cosplay, and the Eye triad monster

I'm pleased to showcase the cosplay efforts of the one and only Kit Quinn, a popular name in cosplay and on the festival circuit. 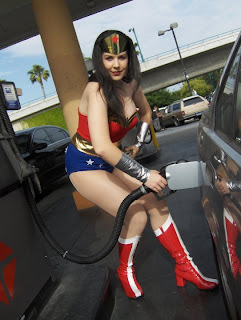 Kit, what brought you to the world of cosplay?

Well long ago…2007…my best friend Tallest Silver was going to SDCC, and I was finally able to attend, so I did! She had been going for years before and it looked like a blast, so 2007 I made three costumes, and hit SDCC running! 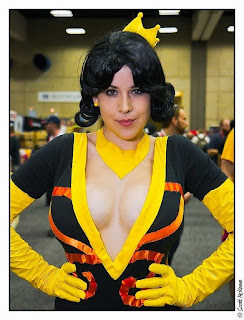 What are your favorite characters to perform?

Harley Quinn is my favorite to PERFORM. She’s a character with a lot of personality and she’s a hoot to run around a con as. You get to mess with people, be witty, fall in love with every joker that passes by…Silv is also always my Ivy so it’s fun to play that dynamic as well.

I have to ask the obvious question, what universe do you draw the most inspiration from for your cosplay efforts...Marvel or DC or independent?

Well due to the sad showing of Marvel characters in my cosplay closet, it’s DC. I tend to do way more characters from that universe than any other. It’s actually funny because most of the time I read independent stuff, but I guess the costumes and bold characters of DC really draw me in. 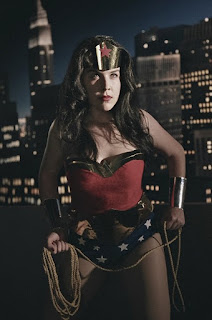 I noticed you've done some interesting gender inversions of traditional superheroes (superwoman to superman), what brought that idea to your cosplay interests? 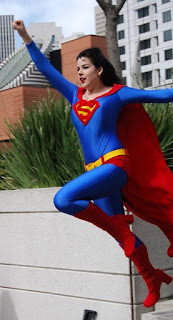 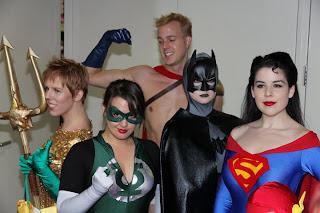 Who would win in a Kit Quinn contest, wonderwoman or superwoman?

Oh man, are we talking fistycuffs or just in my heart? In battle it’s kind of always hard to beat Superman, so Superma’am would probably dominate in this clash as well. Though if Wondy went for Supes’ hair things might be different, Superma’am likes her hair to be styled just so!

If people wanted to find out more about you, where should they go?

Well I would say my facebook, but stupid facebook doesn’t let me have more than 5000 friends, so I’m going to have to say the fan page I share with Tallest Silver. I have a deviantart, tumblr, twitter, youtube, but they don’t get too much attention sadly. Youtube is supposed to start getting more of my attention though!
https://www.facebook.com/pages/Kit-n-Silver
http://www.youtube.com/user/KitJ924

What is Kit Quinn up to for 2012?
Well for 2012 I have around 10 cons on the schedule; hopefully I’ll be able to make them all! And of course there are a couple new costumes being plotted!! 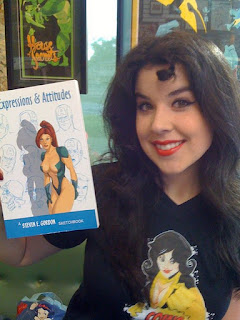 I brought in Cherokee Hall and Todd Burrows on camera to help shoot this clip, and as in all location shoots..we got some strange looks from folks as well as dealing with the wind (I love location shooting, but noise and lighting can be a hassle afterwards).  Claude did the shoots with him and Russ since I was in the 'sleep whhazzat?' phase of new fatherhood.  Heather did a great job rolling in the grass and fighting in spandex(another clip) and dealing with gawkers, sweltering heat, and the bugs in the park.

Oddly enough Steve and Claude and the others would go on their own and make Kentucky's first SAG signatory project 'Breakfast Impossible'...very much adult swim antics...worth a look for spandex and monster fans...


The Eye Triad clip is brief and very rough, but a good way to see how the heroes of metric city unite against a common foe like a bad wizard, or in this case...an evil Eye Triad monster!